Last December I told you about my plan to start helping people I see when I'm driving in Richmond, standing near stop lights, holding signs asking for food or money.  I made up a bunch of packets of crackers, a drink, and a few dollars, and put them in my car.  The first dozen packets also included a small handmade card that said "Merry Christmas, God loves you!"  I've since realized that the card isn't necessary; I just say "Here's something for you.  Have a nice day!" or something similar when I hand out a packet. 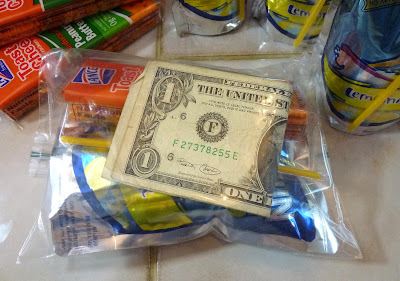 I was so nervous the first time I rolled down the car window and held a packet out to a homeless man!  That feeling didn't last long though; after I'd done it a few times, it became really fun!  Now I scan the streetcorners as I drive along, and if I see someone standing there holding a sign, I try to time it so I will be able to stop at the light and give him a little gift!  (To be on the safe side, I keep all the doors locked and only roll down the window part way.) 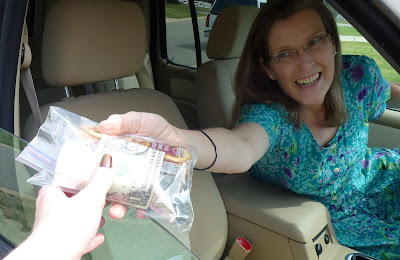 I always hold the packet out with the money on top, so they will be sure to want it!  Last week, though, when my daughter was with me, we had our first refusal.  We were three cars back from the stoplight, and she held the packet out the window.  The guy looked at it and made a sour face, then rubbed his belly, and stayed put!  I took that to mean he had an upset stomach.  A moment later he had second thoughts, and approached our car; Jenna handed him the packet and when he saw the money and the drink, he was pretty happy about it, and thanked us profusely!

A few weeks before that we had our best reaction.  Jenna was with me again, and she held out the packet, and the young man came over, exclaiming "All right!  That's all right!!"  Then he thanked us about ten times, and as the light changed and we started moving, he ran alongside the car for a moment and yelled "I love y'all!!"

I keep a bunch of these "goodie bags" in the car all the time now, so I'm always prepared.  It's an easy and fun way to reach out and do some good in the world.  If you have the chance, you should try it!
Posted by Leslie Andersen at 6:58 AM

That is really a good idea Leslie and not only makes the person who gets your package happy, it also makes you happy!

No better feeling than knowing someone cares!!

Love the idea, the thought and you are doing it! Paying it forward!!