I'm excited about something new--it's a doll named Blythe.

I first noticed Blythe dolls on the swaps board on Craftster;  the doll owners were making and swapping clothes and accessories for their Blythes.  The clothes were really CUTE, and the accessories were FUN, and I wanted to make some too!  But first I needed a doll.

Takara, the company that makes Blythe, is in Japan, and they don't distribute the dolls in the U.S.  There is only one reliable Japanese store that sells them online--Junie Moon--but the prices there are pretty high.  The best place for me to get my doll was eBay.  I started watching all the Blythe listings obsessively, and reading all I could about collecting Blythe.  It turns out that there are a lot of fake Blythes on the market (made from inferior materials), so you have to be careful who you buy from.  Within a few days I saw the particular doll I wanted--"Raspberry Sorbet"--offered by a good seller in Hong Kong; and I didn't even have to play the bidding game, since she was offered as a "Buy it Now" purchase.

While waiting impatiently for her arrival, I continued reading about Blythe collecting.  There are Blythe blogs and online Blythe forums, and there is even a big Blythe convention taking place in Texas in August:  Blythecon 2012!  (Maybe I'll go next year?!)
I also decided on a name for the doll:  Bonnie.

Earlier this week, the mailman rang my doorbell, and I had to sign for the package.  I expected it to take two weeks or more, but she got here in about a week--wow!  The box was wrapped in brown paper and tied with a string, and it was strangely pristine--I've gotten local packages that look like they've been on a long sea voyage, but this didn't have a mark, dent or crease!  Removing the brown paper revealed a plain brown corrugated cardboard box, and inside that was the prize: 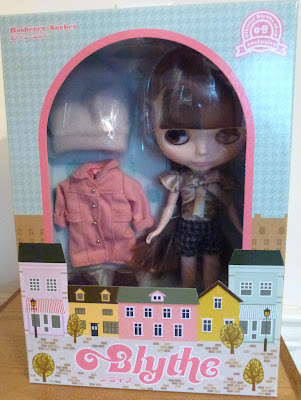 And here she is (below), right out of the box and wearing her full ensemble. 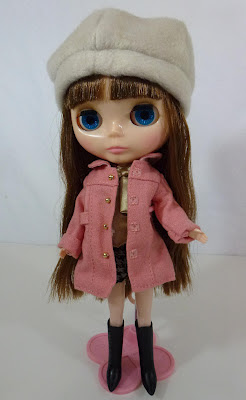 I love the hat, coat and boots she came with; but the shirt and shorts she's wearing needed to be ditched fast.  Time to sew an outfit--yay! 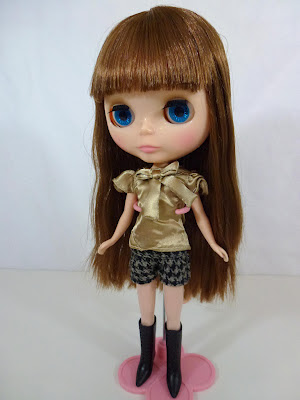 There are a ton of sewing patterns for Blythe online, most notably at Puchi Collective. That's where I found the pattern for this empire waist dress (below).  This is the first time I've sewn doll clothes since I had a Barbie as a pre-teen!  I chose these fabric colors to compliment Bonnie's hair and eyes.  Did I mention that Blythe dolls have changeable eye colors?  They do!  Each doll has four different sets of eyes, and they change when you pull a string on the back of her head.  I'll get busy sewing something to go with each color to show you in the coming weeks. 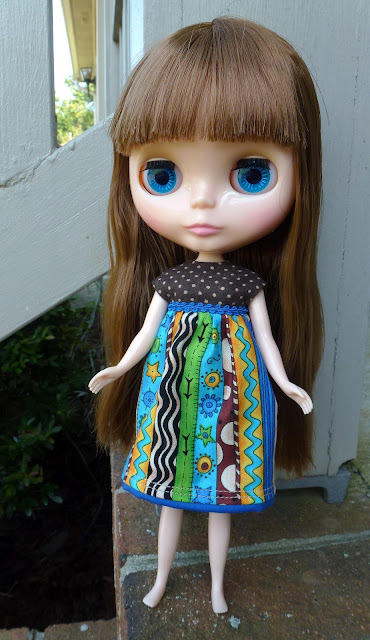 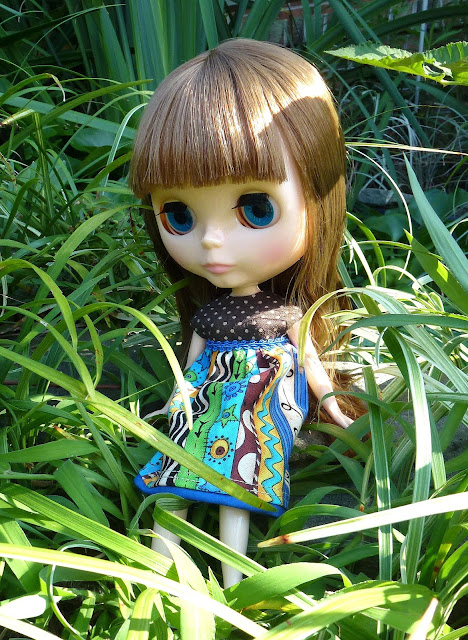 You might have noticed that her head is "slightly" large in proportion to her body.  All the more reason to make cute hair accessories for her!  I'm dying to make some pretty headbands and fascinators.  She also needs a bed... and a chair...and a table...and a house... and a...

If anyone reading this is a Blythe owner, I'd love to hear about your girl!  Leave a comment below or send me an email (leslieandersen4@gmail.com).
Posted by Leslie Andersen at 7:52 AM

Let me try again... I need more caffeine before commenting. I love the little outfits you've made. I am in awe of your tiny little seams and hems!

Oh she is EVEN BETTER than I expected! Interchangeable eyes!!? How did I not know that? Well she is a peach and the outfit that you sewed up for her already is perfect. It brings out the 60s vibe that I love about these dolls!

Leslie - what a great doll - Looks like a lot of fun!

I had never heard of Blythe dolls until this week, and now you are the second person that has mentioned them. I gather they are rather popular in Australia too.

Ooh she's beautiful! I want one now :D
Though I doubt my husband would be very impressed at the cost!!
Think I will have to wait a year or two so I can say it's for our daughter!

I am really pleased with reading your blog!!! Excellent content wrote, thanks