Last month I posted a little story about some mysterious critters who followed me home (mystery critters).  My friend Susan and I turned it into a swap on Craftster, which is now winding down, which means the gallery of completed critters is filling up!  You can see all of them here.

When I made my critters for the swap, I started with the simple pattern and an idea--first, a mermaid, then a turtle.  A starting point, and an ending point. I pulled out a lot of different fabrics and materials and started cutting and sewing.  I was extremely thrilled with what emerged from several hours of focused attention:  first, a beautiful mermaid! 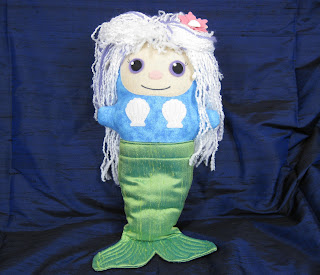 She has a removable tail: 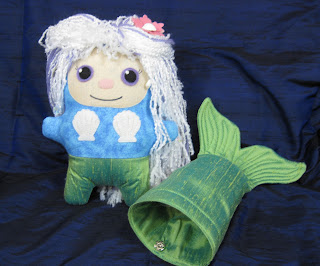 The pattern has ears, and so does she, but they are hidden by the hair.  I sewed shells and clear beads (to simulate water droplets) into her hair, and that's a felt flower with a shell center on top of her head. 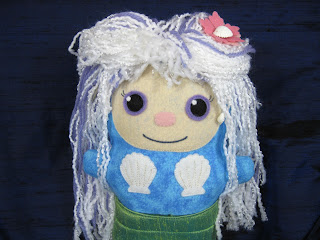 Next up, a turtle.  I looked at some pictures of someone making a realistic sea turtle, which helped me visualize making the shell. 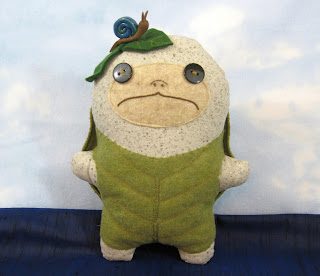 Everything came together very smoothly, although the shell is different than I had planned.  The front and back are sewn to the body separately. 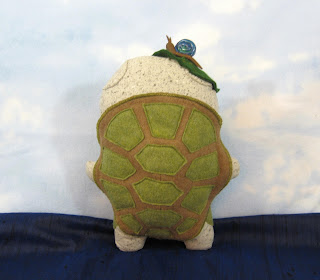 To stay true to the pattern (since this was MY pattern and I was the swap organizer, and I told everyone to stick to the pattern...I had to stick to the pattern too!) I included the ears on my turtle, but left them unstuffed, and sewed them down to the back of his head.  But then his head just looked so big and bald!  He needed something...so I made a polymer clay snail and some felt leaves for him: 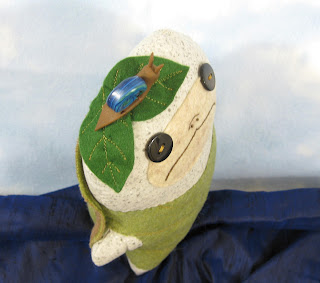 And here they are together.  I call them Merry and Ollie.  They are my first "art dolls". 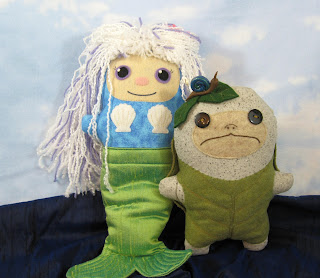 " Art dolls are dolls created by artists and intended as expressive and unique art objects rather than children's toys."--that's what Wikipedia says.  Each of them is one-of-a-kind, and has a great amount of detail.  I started with only a simple pattern that I built upon as I went along--I can't even THINK about recreating either of them--now that I know how much work went into them!
I have made about a dozen of these critters as toys, which are much simpler and child friendly.  The face is the most important part, so I take great care with that.  These are child-safe, made only with felt,  fabric, embroidery thread, and stuffing: 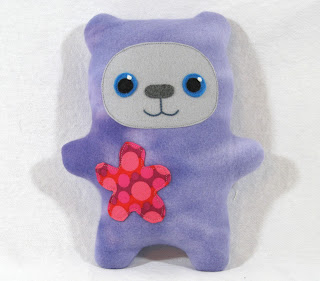 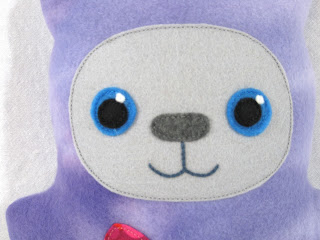 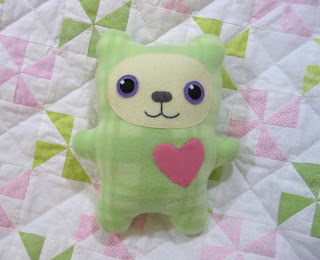 I'm currently selling these child-friendly dolls in my local store; I call them "Happy Critters".
I hope you will try making a critter, and if you do, I'd love to see it!
Posted by Leslie Andersen at 8:24 AM

Too cute! Love the turtle and the fact that you can pop the mermaids tail off...very neat (o=
Sam