If you live in the U.S., I know you have heard of the Dr. Seuss character called the Lorax.  He had his own animated movie this year, and even though I didn't see it, I saw plenty of ads for it on TV, so I had a idea of who the character was.  That came in handy when I started to make a ninni monster for one of my partners in the Halloween/Autumn Ninni craft swap on Craftster.  That partner happens to love the Lorax. Since his body is already very ninni-shaped, I decided I would turn a ninni into a Lorax for her.

This is your basic ninni: 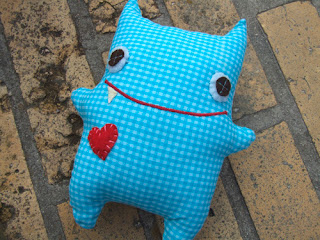 The image below is the Lorax as drawn by Dr. Seuss: 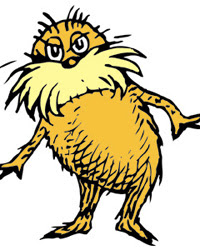 This next image is from a trailer for the movie: 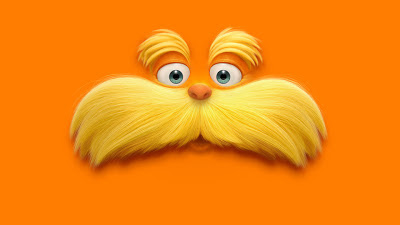 I used all three of those to come up with my Lorax ninni. 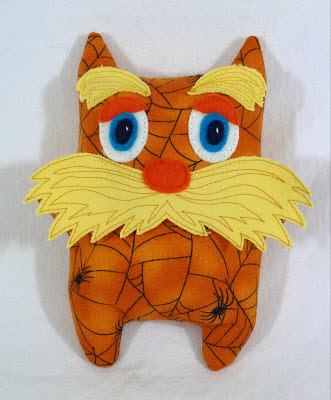 I made his mustache so large it looks like he doesn't have any arms!  Here's another picture of him from the side where the arm is visible. Since this was a Halloween-themed swap, I used spiderweb-printed fabric.  (So, maybe the Lorax visited a haunted house, and came out covered with spiders and webs?) 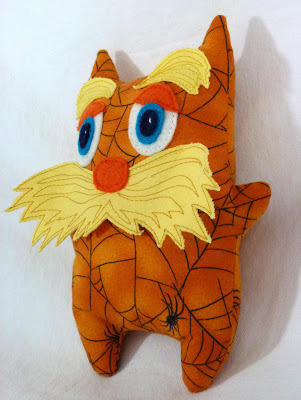 The eyes are wool felt; the mustache and eyebrows are two layers of yellow fabric that are fused together with Heat n Bond.  I machine-sewed all over them to give them some detail.

It's amazing how many different things you can do with the simple ninni monster pattern!  If you visit our craft swap gallery, you can see all the pumpkins, bats, witches, Frankensteins, and everything else in residence there. One of my partners sent me the most wonderful little mummy, and I've turned it into a creepy decoration for my front door...which I will show you next time!
Posted by Leslie Andersen at 1:56 PM

Brilliant, Leslie!! I would have recognized that Ninni as a Lorax even without the reference :). I need to swing by that swap gallery.

A showstopper! Loraxninni is such a crazy creative turn, I love it!

Have a nice week.