Thank you, Susan, for leaving a comment on the previous post about perler beads.  That was all the motivation I needed to rip open some packages and start creating!  I decided to make a heart with the letter "S" in it, to include in my Craftster personal swap with Jo S.  We are swapping a small flat-rate box full of hearts, and so far all mine are made of fabric.  A perler bead heart would be a great addition to that!  At Craft Gossip's Fork and Talk on Saturday I received the supplies pictured below:  a huge pegboard, where you create your design; a book of patterns (place the book under the clear pegboard and add corresponding-colored beads to the pegs), and a bag of perler beads.  (There was another big kit of beads and pegboard shapes to make an underwater scene, but I didn't open it for this project). 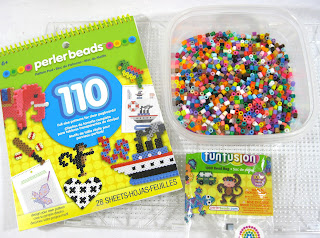 The small package of beads has 1000 pieces, which I thought was more than enough for my first attempt, although I quickly realized two things:  there are so many different colors in the bag that you probably don't get more than 50 of any one color, and it takes more than 50 beads to make just about anything!  So instead of using all one shade of green for the outside of my heart, I mixed up several shades.  I think it looks batter that way, actually!  See my finished heart below. 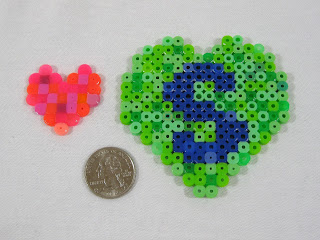 When you have finished your beaded design, you cover it with paper (included in the pegboard package) and iron it on medium for 10-20 seconds to fuse the beads, then let them cool a bit, flip the beads over, and iron again to fuse the other side.  I was afraid my beads wouldn't fuse and I would lose my design, so I ironed for about a minute, then cranked up my iron to high for the second side!  I think I overdid it!  It will take some practice to get it just right.  I tried a second, smaller heart, and I REALLY ironed it--I liked the way the holes disappeared the more I ironed, and it started to have a patchwork-quilte look.  When I look at the pictures provided with the supplies, though, I see that "officially" the holes are supposed to show.  That's probably a good idea, because I can see how over-ironing the beads could get messy, and I wouldn't want to melt my pegboard!

You can also buy shaped pegboards.  The pegs on those boards are arranged to compliment the item you are making, so my hearts, for example, would have turned out more rounded and less pixelated-looking with a heart-shaped pegboard.  Go to http://www.perlerbeads.com/  for more information.

Thank you to EK Success Brands for the supplies I used for this project.  It was fun!  At Susan's suggestion I looked online and discovered all kinds of amazing people doing amazing things with perler beads.  I want to try turning them into hair clips, key chains and brooches.
Posted by Leslie Andersen at 7:52 AM