Now that we are well into December, my crafting has shifted from Christmas-themed to a more general winter theme.  Coincidentally, I had some special orders this week for purses that are blue and winter-themed.

Lee Ann, a regular customer of mine for many years, LOVES bears and teddy bears, so when she called to ask for something wintery that would go with blue jeans, this is the first fabric I thought of, since it has bears on it.  It has a wonderful back-woods, log-cabin feel to me. 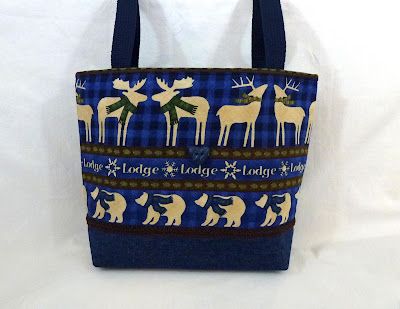 But I wanted to give her more than one choice, so I made this bag too.  The fabric has different stripes of wintery scenes:  snow-covered houses, bare trees, and big silver and white snowflakes. 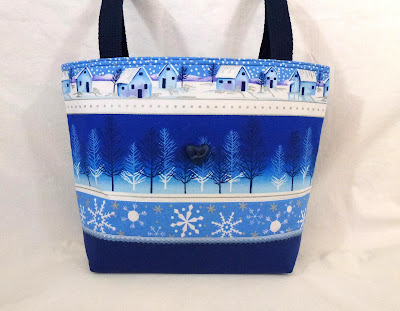 At the same time I was making these two bags, another regular customer, Debbie, called to ask for snowflake bags for herself and her daughter (Debbie ordered the Christmas bag and school-themed bag I showed you a couple of weeks ago).

I made these two bags for Debbie and her daughter, and then showed all three pictures to Lee Ann. 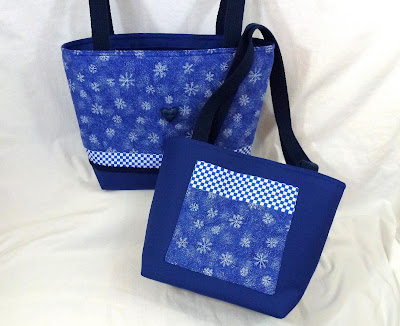 Much to my surprise, she chose the second bag with the bare winter trees!  It really is a great fabric, with touches of metallic silver sparkling all over it.

Just as I sat down to write this post, Debbie called to say her daughter had just picked up the two snowflake bags (I had left them for her at the local store that carries my crafts) and they both LOVE them!  She said they plan to get bags for every holiday and season!  That means I need to start looking for some great Valentine's Day fabric!!
Posted by Leslie Andersen at 5:05 PM

These are lovely winter bags. It's nice that they are blue so they can be used throughout the season, not just during the holidays.

Yes about the winter blue! These are winter winderful, leslie! You find amazing fabric and turn them into more amazingness and i wouldnt be able to choose just one. With jeans? Divine!