All You Need is Love

Earlier this week I sent prayer flags to my two partners in the Prayer Flag Swap Round 2  on Craftster
(which I just happen to be coorganizing, with my friend Susan). One flag reached its destination yesterday, so I now can reveal it to the world! 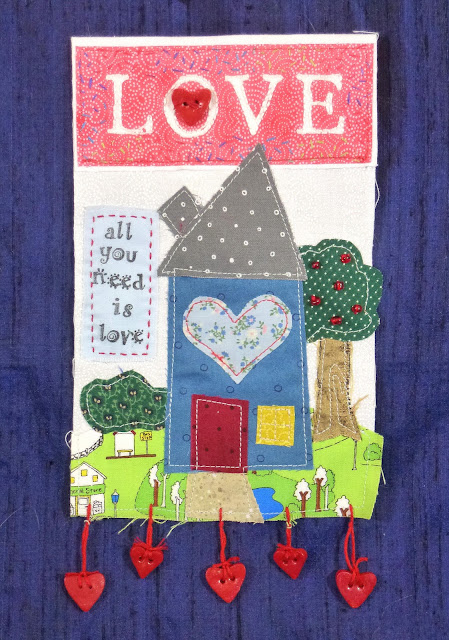 My partner, StickerChic87, loves the Beatles, and one of the phrases she likes is "All you need is love", from one of their songs.  She also loves images of houses, so I used both of those to make her flag.

I left all the edges raw, and cut the fabrics free-hand, so everything has a "wonky" look.  I think the secret to keeping a project like this from looking poorly-made is to include an element that is carefully crafted.  In this case, it is the top section.  I made the word "love" by setting cardboard letters on white fabric, and then spraying the fabric with Tulip Fabric Spray Paint. After removing the cardboard letters and letting the paint dry, I stitched around the letters with white embroidery thread, and added embroidered seed stitches (using a rainbow thread) all over the red area. Then I machine-stitched it to the flag. 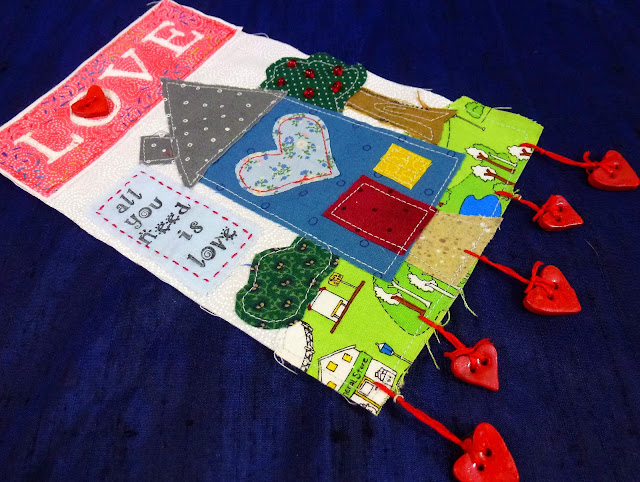 I find prayer flags to be enjoyable and satisfying to make, because they come together rather quickly and easily for me. Since they are intended to be ephemeral (one way to use them is to display them outside and let them gradually deteriorate, thus releasing the prayer into the world), exquisite craftmanship is neither required nor expected.

StickerChic87 says she loves her flag and that it was just what she was hoping for--which is exactly what I was hoping to hear!
Posted by Leslie Andersen at 10:04 AM

That is an amazing flag! Now I'm nervous about the one I'm making lol.

Oooh I was curious as to how you did the "LOVE" across the top. Now Im going to go take a closer look. Thanks again! :)

It is beautiful! Love the wonky look, the raw edges.

We have a tv program that has the name "All you need is love" and around Christmas time they have a great special. Bringing lovers and loved-ones together for Christmas.

I just found your site and wanted to say that I have really enjoyed browsing your posts.In any case I'll be subscribing to your blog and I hope you post again soon.