Today would have been my brother David's 51st birthday.  He passed away at the age of 33 from AIDS.

Since I've been quilting since I was 14 years old, it was natural that I would make a panel representing him for the AIDS Memorial Quilt; in fact, before he died, he asked me to do so.  I finished it during the year following his death, and sent it to the Names Project, where it was sewn into a larger piece with 7 other panels.  This is the official picture from The AIDS Quilt website; David's panel is in the lower left corner: 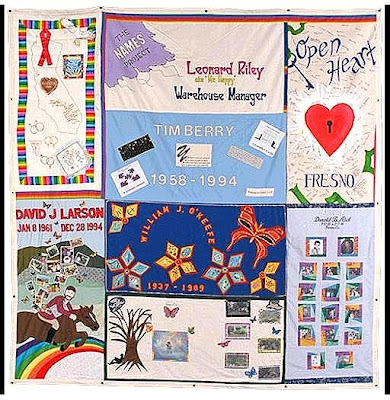 Here's a closer look at the panel I made; this picture was taken in 1995, right after I finished it. 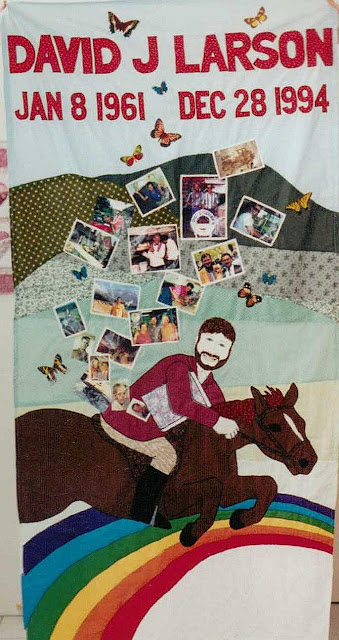 When we were teenagers, our family lived on 10 acres in Virginia, and David and I each had a horse.  In this panel, I have depicted him on his quarter horse, Miss Virginia.  Under his arm is a photo album, with pictures streaming out of it; they are actual  photographs from his life, transferred onto fabric.  The panel measures 3 feet by 6 feet, which is surprisingly large when viewed in person.  I saw a display of sewn-together panels at a library in Las Vegas many years ago; it was a moving experience and it felt very much like visiting a cememtery. 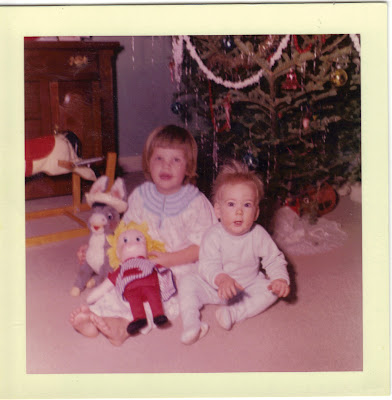 We miss you, David.
Posted by Leslie Andersen at 10:26 AM

That is an awesome tribute to your brother.

What a wonderful tribute. I saw the quilt in its entirety (at the time) laid out on the ellipse in Washington DC back in 1990. It was an incredible experience. As you said, much like a cemetery. An amazing representation of lives lost to this disease and an amazing amount of talent expended upon the tributes.

This is beautiful, Leslie. I'm sure he would be would be very proud of this representation.

I am sorry to read about your brother Leslie!
What you made is just beautiful and so you and him, your connection.

Him asking you to do so, makes it even more beautiful! I can see the love!