It was back in March that the Monster Pouch Swap ended on Craftster; I sent packages to two partners.

This one went to CraftyMamaBee.  In case you couldn't tell, she loves pink, and cupcakes!  I made this girly monster to fit her Kindle Fire.  I also included a lavender sachet with a scripture quote, because she likes both lavender and scripture, and a piece of fabric with cupcakes on it. 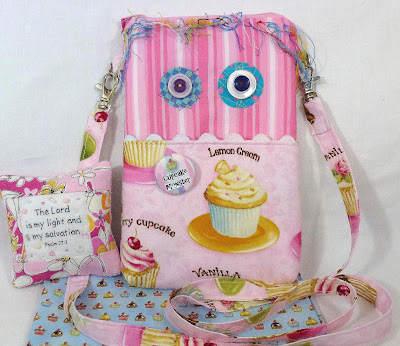 I made a pin-back button for the monster to wear: 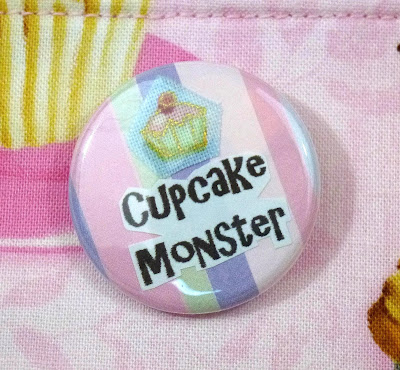 I had a second, unofficial partner, Photochris.  She hadn't been a member of Craftster long enough to be eligible for the swap, but when she sent me a message inquiring about it, I was interested in her as a person (she is German, but living in Russia with her husband and children, and has recently spend four years in New Jersey!) that I wanted to do this swap with her as a personal swap.  I sent her a package similar to CraftyMamaBee's--the pouch was the same size and style, in colors she likes, and with a slightly different monster face (I guess a third eye is only slightly different, if you're a  monster!)  I also included a tissue cover with tissues, and a piece of scissors-print fabric. 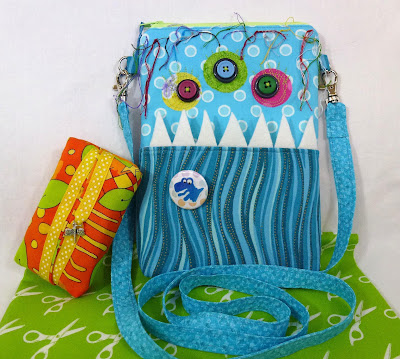 Her monster also wore a pin (it's either "his" girlfriend or "her" boyfriend...I'm not sure if this monster is a girl or a boy...) 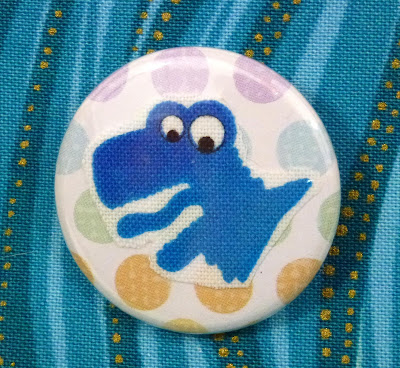 Here's a group shot (below) with the first monster pouch I made in the middle.  After making it I realized that the teeth were wool felt, and CraftyMamaBee is allergic to wool!!  So I made the pink one for her, and used the gray one in my Seven Days of Giveaways in March.

The cupcake monster arrived at her new home in California on March 8th, a few days after I sent out both packages.  But--the blue monster IS STILL IN TRANSIT!!  Yes, that's right, today is May 4th, and still no sign of it.  Apparently, mail to Russia moves slower than a snail's pace.  I received my package from Photochris about a week after it was mailed--but she mailed it from Germany, where she was visiting her parents.  I haven't given up on it though; maybe she will get it for a Christmas present! 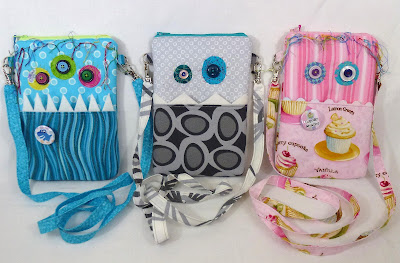 And now, a gratuitous repeat of the picture of the pin-back buttons I made for all the bloggers who gathered for Craft Gossip's Fork and Talk luncheon in Little Rock two weeks ago.  It came to my attention that the quilting editor, Scarlett, ran a short post about these buttons yesterday!  So if you are visiting my blog from that Craft Gossip post, welcome!  You can read my post about making these buttons here. 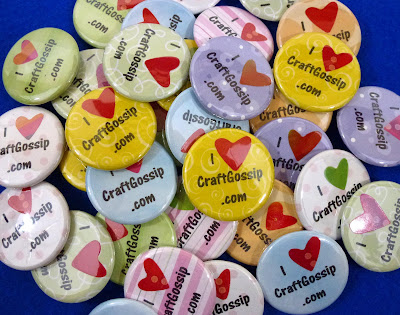 Hmm, that gets me to thinking...maybe I should do a button giveaway sometime?
Posted by Leslie Andersen at 6:52 AM

Hi Leslie How you doing? Well thanks for visited my virtual house (my blog) you are allways welcome.

So I like so much your monsters and the tells about them.

Have a nice weekend!!!

The middle monster just took his first trip! Thank you again, I love it. I hope your other bag makes it to its destination soon.

And here I am, complaining about the packages to the US taking soooo long! Oops!
That is a very long journey! You could walk there and be quicker!

All these monsters are so cute! Love the teeth and their eyes. Very well done!

Oh yes, Leslie a button give away... Sound exciting! I already have one of your famous buttons! With my favourite phrase!

The pink monster has to be the sweetest monster in the world.