I needed to make a few more Junker Jane-inspired stuffies to really get a feel for her style before the craft swap starts on Craftster.  I noticed that she makes a bunch of ornaments every year about this time, so that's what I decided to try next.

The first three I made have a definite "creepy" feel to them.  Maybe too creepy.  I used bright Christmas fabrics, hoping that would make them look more cheerful...hmmm... 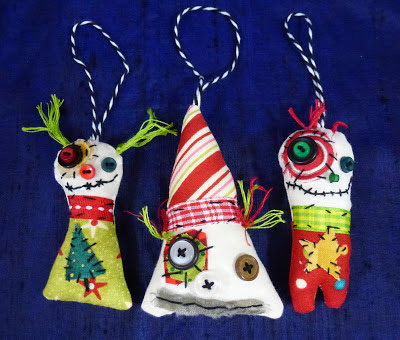 I decided to slightly enlarge one pattern and make one that was cuter--instead of black stitching, I used green, and I eliminated the extra lines on the mouth.  Here's how he came out: 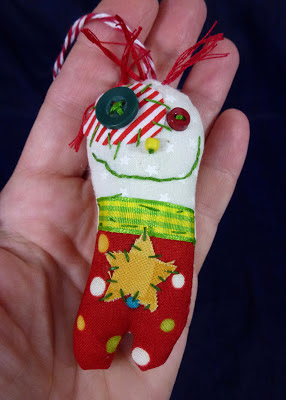 Yes, he is definitely cuter, but...is he still a bit creepy?  Would he scare a child?  (I don't want to scare children!) 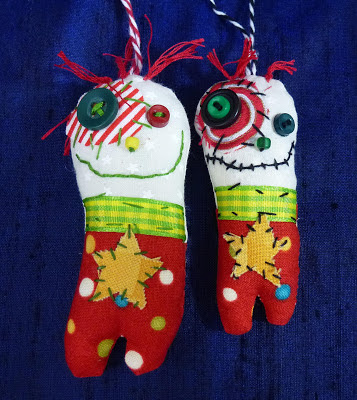 I know that the Junker Jane style isn't for everyone, and for many (like me!) it is an acquired taste.  This experiment has shown me that the details make all the difference in the attitude of the stuffie.  Don't worry, I'll go back to my "regular" style after this!
Posted by Leslie Andersen at 9:21 AM

I love these Christmas-y ones! Great job!

The lines on the mouth really makes the difference Leslie! That last one isn't creepy.

I like the Junker-Jane style without the stitched mouth. That really freaks me out. Hahaha, that is just me. I do like the mismatching arms, legs and eyes though. And a bit sadness is okay too. Just not creepy for me.

The first ones are a bit creepy, but I don't think children will find them very scary, because of their fresh, Christmas colours.

But,that is just my opinion! Do keep up the expanding your horizon and your comfort zone Leslie! It will bring you so much creativity. Love that!

Thanks, Beth and Wendie!

Wendie, thanks for your opinion about the scariness of the ornaments. I needed that! I'm working on another one today that I know is cute and wonky but not scary, I'll reveal it soon!

the green mouth really does soften them -- you couldnt go wrong there with a preschooler. what a great bunch of leslies happy....um, creepycuties!