Just in case my previous post about Artist Trading Cards didn't convince you, let me urge you now to grab some supplies and give them a try!  They are made for trading, so join a swap--there's an on-going ATC swap on Craftster that I'm participating in all month.  If you have been a member of Craftster for at least 30 days, you can sign up too!  Come on, I want to swap with some new people!  The best thing about ATC's is that you don't have to be accomplished in painting or drawing to make them; if you can cut and arrange paper and printed images, and glue them in place, you can make ATC's!  Here are a few more that I made this week:

"Let's Go" was for the theme "map as background".  I've seen an embroidery hoop with this packed car on Pinterest, and this image came to mind immediately when I tried to think what to put in the foreground.  I drew the car on drawing paper with a sakura micron marker, then added the color with colored pencils.  I cut it out and glued it onto the map (which I had already glued to a 2..5" x 3.5" card).  It's part of a map of Kansas sent to me by my friend Diane in a Craftster swap!  Thanks, Diane! 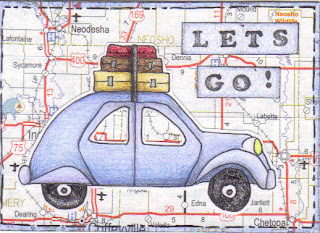 "Want Cake" (below) requires a bit of explanation.  It is for the mom of a boy who got a betta fish.  He named the fish "Want Cake".  (He's very young...but hey, I want cake too!!)  I happened to have this scrapbooking paper with cake images all over it, so I used that as the background.  I did the fish exactly the same way as the car in "Let's Go"--I drew it, colored it, then cut it out and glued it to the background--but FIRST I cut a fishbowl shape from clear plastic and traced around it on the background, then added the blue (to look like water) to the background with a copic marker.  After gluing the fish down, I added the plastic on top of it.  Now that I look at this card again, I wish I had outlined the bowl with the micron marker.  I could have added some details to the cake too.  Next time. 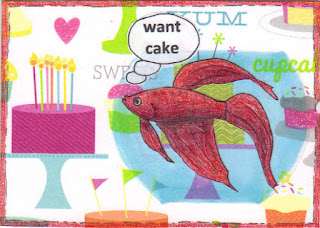 "All Are Welcome" (below) was an "artist's choice" card for a swapper who gave a lot of information about herself, including the fact that she loves tiny houses--thus, the houses and hearts.  She also said that she loves all people, so I added the message of inclusiveness.  I think she will like this. 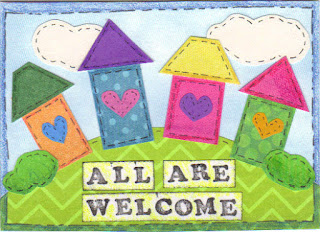 There's lots of information about making ATC's online, like this article at Altered Art or this one at wikihow.  I find that creating these cards--which are small and quick to make--is a good way to hone my skills of composition and creating color schemes, which carry over into all my creative projects.
Posted by Leslie Andersen at 8:14 AM