A Different Kind of Stuffie

Every month on Craftster there is a Birthday Craft Swap; March was my birthday month, so I joined the swap!  Everyone who joined posted a list of things they would like to receive, and the other people in the swap could choose to craft anything on anyone's list.  The only requirement was that you "claim" at least one item to craft during the month.

I made two claims, and I've already shown you the pink and gray Kindle Cover.  The other thing I made was a little outside my comfort zone as far as style goes, but it was right up my alley in that it was a stuffed toy.  I present to you:  Octo-bear! 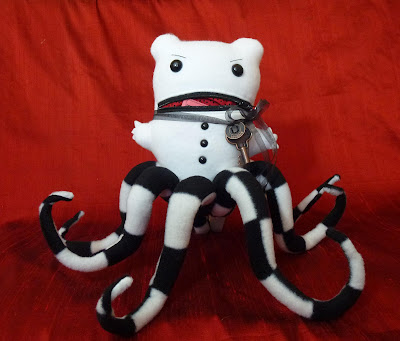 Usually I go all uber-cute when I'm making stuffies, but this one wasn't for me, so I had to make it to my partner's liking.  She had a creature very much like this on her Pinterest, with a teddy-bear for the top part; I used my Mystery Critter pattern for that.  I gave it a zipper for a mouth to make it look scarier, but that wasn't quite enough, so as a final, touch I gave it the scowling eyebrows--THEN it had the proper demeanor! 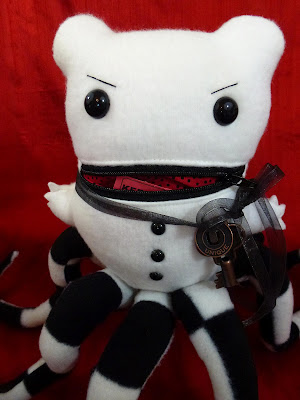 I had some black and white checkerboard fleece that worked great for the legs; they are stuffed with fiberfil and have heavy wire all the way to the end so they can be posed any way.  Sewing the legs to the body turned out to be very simple (I had worried about it and thought it through a LOT!)  For the finishing touch, I tied a ribbon around it's neck with a key and a coin bearing the words "secret" and "unique".

My partner said it was the best stuffie ever, so I guess I got it right!  I learned from this swap that I can be flexible with my style when I need to be--that's nice to know.
Posted by Leslie Andersen at 7:24 AM

Oh my gosh, it is so cute! <3 That's so awesome. It's amazing that it was out of your comfort zone, I'd have never guessed!

Fantastic job. I'd love to see how you sewed the legs to the body. I've been trying to figure out how I would do it.

It is awesome that you made it, I still think it is a bit creepy... Yikes, reminds me of spiders!!

I'd love to see how you attached the legs to the body too. I haven't got a clue on how to easily do so.

Great job, the octobear was a great success on Craftster!

Very clever and unique! I find it really hard to think outside of my own ideas of "cute" but you did an amazing job of it. This is so different and I love it!