I just got back from my weekend in Little Rock, Arkansas, where I attended the second blogger's meet-up, called "Fork and Talk", hosted by the website Craft Gossip and sponsored by EK Success Brands on Saturday.  I had so much fun!  Since I had also attended the Fork and Talk in September, seeing the editors and many of the same bloggers was like meeting up with old friends!

The meeting took place in a private dining room at the classy Trio's restaurant.  I took the picture below facing the mirrored wall, so you can see the whole dining room.  This was before we started. That's the quilting editor, Scarlett, seated at the table. 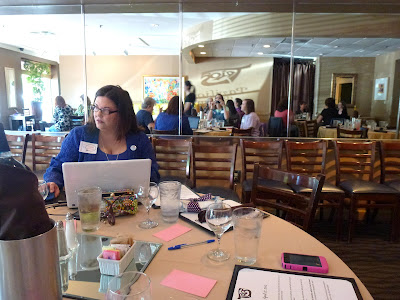 Needlework editor Denise got things started, then we went around the room and each blogger told a little about herself. 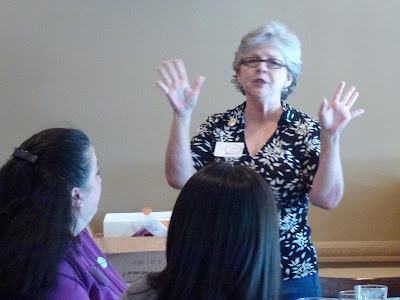 When it was my turn to speak, I showed off my Scrappy Snappy Pouches, because they were such a hit when they were featured on Craft Gossip last fall! 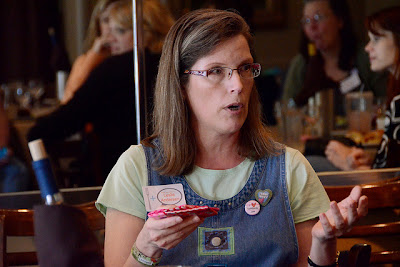 I sat next to Suzy, whom I have kept in touch with since the last meet-up (she has joined Craftster and we have been craft-swap partners); she announced that she is expecting her first baby in December!  Congrats, Suzy!!! 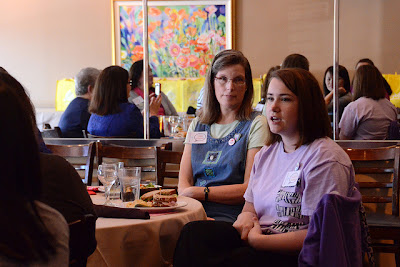 We had a lovely lunch, with our choice of five selections from Trio's menu.  (The "I Heart Craftgossip.com" buttons I made and handed out to everyone were a big hit!  You can see that I had some left over, so they are posing with my menu!) 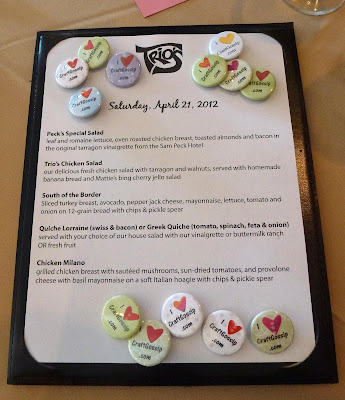 I had the Quiche Lorraine--YUM! 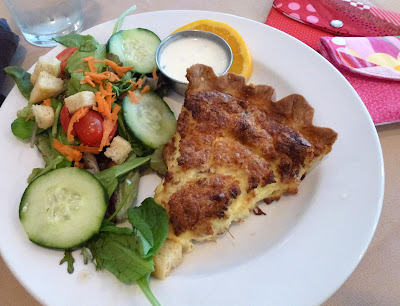 We played a fun game:  each table was given an 8" x 10" photograph of the editor at that table, and we gave the photo a makeover!  Here are the editors posing with their photos.  And the winner is... 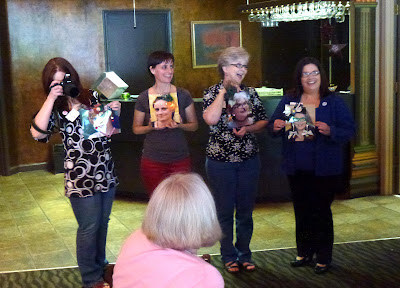 SCARLETT, at my table!  We won--again!  I was at her table last time too!! 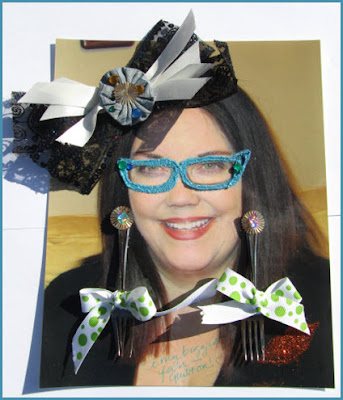 Everyone at the table got to choose a prize, and I was quick to snatch up this vintage embroidered tablecloth that Scarlett had brought.  She has encouraged me to get crafty with it--so I am going to cut into it when I am brave enough!  I'll show you the results when that happens! 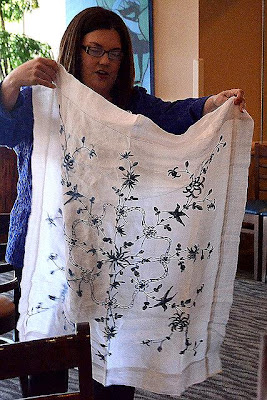 As things were winding down, we each got a packet containing everyone's business card, so we can find each other on-line and keep in touch. 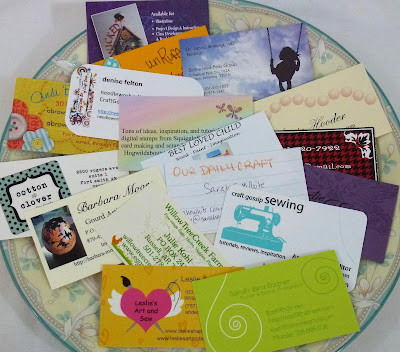 And for the grand finale...we each got a BIG BAG OF GOODIES from EK Success Brands!  I am going to keep you in suspense about what's inside...check back on Thursday, when I reveal the contents! 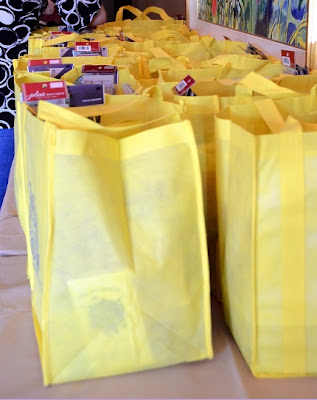 Thanks so much, Craft Gossip and EK Success Brands, and especially to the four editors who worked so hard to make the afternoon a fun success:  Denise Felton (needlework editor), Scarlett Burroughs (quilting editor), Anne Weaver (sewing editor), and Stacie de Klerk (jewelry editor).  It was fantastic!
Posted by Leslie Andersen at 8:32 AM

Loved the photos you shared. Your prize of the vintage tablecloth is lovely. What a fun day everyone had, and your lunch looked delicious.

oh this looks like it was a BLAST!!
it's so great that Craft Gossip hosts this event: it's fun, it's encouraging, everything about it is a total thumb's up.

i am screaming over what you guys did to that 8 X 10! there's a business in there somewhere.

it's great seeing you in the real, leslie!

I want to know what is inside the bag, please let it know!!!

I'm SO glad that I got to see you again!! It was wonderful getting to sit next to you!! I think we did a pretty awesome job with Scarlett!! I can't wait for the next lunch!!

Oh, that is an event I would love to be a part of!
It looks like you had lots of fun, got to share lots of stories, great food, awesome prize...

Very nice to see you and Suzy there!

Thank you for coming to our meet-up! It was so good seeing you again! Can't wait to see what you make with that table topper!

It was great getting to meet with you and everyone else at the Fork and Talk. I am just jealous that your table won again this year! Can't wait to see what you do with that beautiful table topper!